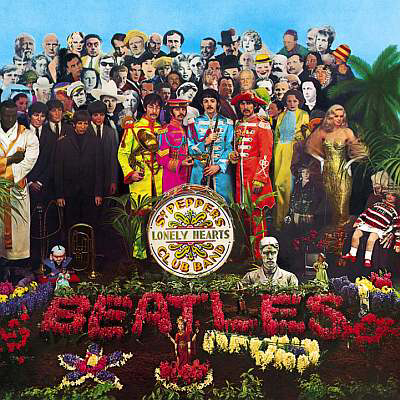 I feel the need to throw my penny into the pot and publicly celebrate the 40th anniversary of Sgt. Pepper’s Lonely Hearts Club Band, the seminal album by the Beatles that was released 40 years ago today. So much has been written about this album, but here are some of my own personal highlights of a cultural landmark:

2. With a Little Help From My Friends
Somehow joyous and sad at the same time. I love the line ‘What do you see when you turn out the light? I can’t tell you but I know it’s mine.’ Adding the major chord on the flattened 6th degree in the coda (the C-D-E chord sequence that ends the song) is pure poetry – and was later ripped off note-for-note by Oasis on She’s Electric.

3. Lucy In The Sky With Diamonds
Three key changes, two changes of time signature, multiple layers of instrumentation – they don’t write songs like this any more.

4. Getting Better
I love the way Paul’s optimistic ‘It’s getting better all the time’ is countered by John’s wryly cynical ‘It can’t get no worse’ – the fundamental difference between the two of them is captured right there.

5. Fixing A Hole
One of Paul’s most underrated songs – you can hear his mind wandering in those breezy chord changes.

6. She’s Leaving Home
A beautiful song that magically captures the heartbreak of a girl leaving home for the first time. The plagal cadence at the end is perfect – it’s an amen, a devastating goodbye, a beatiful finale to a hymn on growing up. This is my second favourite song on the album.

7. Being for the Benefit of Mr Kite
Great arrangement – you can smell the sawdust.

8. Within You Without You
The best of George Harrison’s Indian-influenced songs. I love the funky 5/4 instrumental section in the middle, and the way the tablas bring the sung section back in so deftly.

10. Lovely Rita
The weakest song on Sgt. Peppers. Good bassline though. In fact the bass playing throughout the album is some of Paul McCartney’s best work.

11. Good Morning Good Morning
John Lennon had a natural flair for changing time signatures, which he seems to do instinctively. This song is a great example of his effortless shifts, with (depending on how you count) sections in 2/4, 3/4, 5/4, 6/4 and 6/8. It all adds to the sense of everyday life being thrown out of whack – a theme expanded on brilliantly in the final song on the album, A Day in the Life. Also, nice the way the final chicken cluck turns into the guitar break at the start of the next song.

12. Sg. Pepper’s Lonely Hearts Club Band (Reprise)
Great the way the reprise starts in F major and works its way back to the G major key of the first track on the album. Clever stuff.

13. A Day In The Life
The crowning glory of the album, and probably the best Beatles song of all. It’s the indefinable ‘otherness’ of the performance that gets me every time. I’ve seen this song analysed by so many people, but nobody has explained to me how Lennon captures that bizarre tone of estrangement, the floating disengagement of emotion that makes his musings on life, death, war and the riddles of existence all the more poignant. And that final piano chord is like the sound of the universe going on forever.

Welcome to The Culture Club

Hello and welcome to the Culture Club blog. This is where I share my love for culture, art, literature and music, by discussing the works I enjoy with my friends as part of the Culture Club. See the About page for information on how the Culture Club operates. Please feel free to add your comments to the topics debated here.