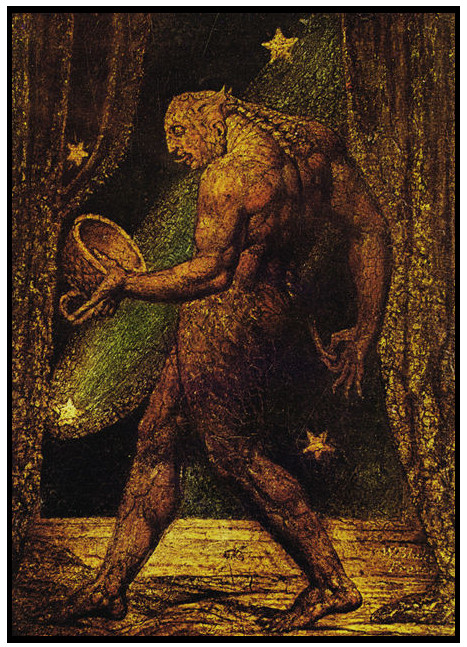 I was fascinated (and entertained) by this discussion of a picture of William Blake’s in Chesterton’s short biography of Blake. It’s not only a highly entertaining read, and a valuable insight into the picture under discussion, but I think it reveals a lot about the artist William Blake, both as painter and poet. As it’s also a picture on a supernatural theme, and the supernatural is the overall theme of this month’s Culture Club, I’ve reproduced the commentary below.

The first thing that any ordinary person will notice about it is that it is called ‘The Ghost of a Flea’; and the ordinary person will be very justifiably amused. This is the first fact about William Blake – that he is a joke; and it is a fact by no means to be despised. Simply considered as a puzzle or parlour game, Blake is extraordinarily entertaining… It is as if we had a highly eccentric neighbour in the next garden. Long before we like him we like gossiping about him. And the mere title, ‘The Ghost of a Flea’, represents all that makes Blake a centre of literary gossip.

And now, having enjoyed the oddity of the title, let us look at the picture. Let us attempt to describe, so far as it can be done in words instead of lines, what Blake thought that the ghost of a flea would be like. The scence suggests a high and cheerless corridor, as in some silent castle of giants. Through this a figure, naked and gigantic, is walking with a high-shouldered and somewhat stealthy stride. In one hand the creature has a peculiar curved knife of a cruel shape; in the other he has a sort of stone basin. The most striking line in the composition is the hard long curve of the spine, which goes up without a single flicker to the back of the brutal head, as if the whole back view were built like a tower of stone. The face is in no sense human. It has something that is acquiline and also something that is swinish; its eyes are alive with a moony glitter that is entirely akin to madness. The thing seems to be passing a curtain and entering a room.

With this we may mark the second fact about Blake – that if his only object is to make our flesh creep, he does it well. His bogeys are good reliable bogeys. There is really something that appeals to the imagination about this notion of the ghost of a flea being a tall vampire stalking through tall corridors at night…

The third thing to note about this picture is that for Blake the ghost of a flea means the idea or principle of a flea. The principle of a flea (so far as we can see it) is bloodthirstiness, the feeding on the life of another, the fury of the parasite… This is the next point to be remarked in his makeup as a mystic; he is interested in the ideas for which such things stand. For him the tiger means an awful elegance; for him the tree means a silent strength.

If it be granted that Blake was interested, not in the flea, but in the idea of the flea, we can proceed to the next step, which is a particularly important one. Every great mystic goes about with a magnifying glass. He sees every flea as a giant – perhaps rather as an ogre. I have spoken of the tall castle in which these giants dwell; but indeed, that tall tower is a microscope. It will not be denied that Blake shows the best part of a mystic’s attitude in seeing that the soul of a flea is ten thousand times larger than a flea. But the really interesting point is much more striking. It is the essential point upon which all primary understanding of the art of Blake really turns. The point is this: that the ghost of a flea is actually more solid than a flea. The flea himself is hazy and fantastic compared to the hard and massive actuality of his ghost. When we have understood this, we have understood the second of the great ideas in Blake – the idea of ideas.

Welcome to The Culture Club

Hello and welcome to the Culture Club blog. This is where I share my love for culture, art, literature and music, by discussing the works I enjoy with my friends as part of the Culture Club. See the About page for information on how the Culture Club operates. Please feel free to add your comments to the topics debated here.